ILORIN, NIGERIA – In Kwara State, Nigeria, a state-supported health insurance program is improving access to quality healthcare for low-income people in one of Nigeria’s poorest states. The Kwara State Health Insurance Program recently welcomed its 100,000th enrollee: an important milestone for the program but also an indication that this public-private model of healthcare delivery could be a game changer on the road to universal health coverage. After all, what is working for 100,000 people in Kwara could potentially work for millions. 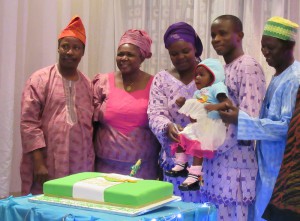 “Being registered in the health insurance program has helped to limit my family’s spending on health. Now I can plan our finances better knowing fully well that our hospital expenses are covered by the Kwara State Health program.”

Up to 62% of the state’s population lives below the poverty line. Most earn a living as farmers, meaning their income is not only low but also erratic. While the need for healthcare in Kwara State is high, the ability to pay is very limited. As a result, there were not many clinics to provide quality health care services in the State, and the situation was even worse in the rural areas.

As health insurance was non-existent, the first few years of the program were spent sensitizing the population on the concept and improving the quantity and especially the quality of healthcare services on offer. By partly subsidizing the insurance premiums, health insurance was brought within reach of those who would otherwise not be able to afford healthcare. As more and more people have experienced the benefits firsthand, enrollment rates have been steadily rising and the program is now accelerating to achieve its target of covering 60% of the rural population of the State by 2018.

Results so far
Both public and private health facilities in the program have been renovated, receiving over half a million patient visits since the start of the program. Access to health insurance has brought average out-of-pocket spending down by 52%, as people are now protected from catastrophic health expenses when they fall ill. There has been a 200% increase in healthcare utilization. Women account for over 67% of patient visits. Hospitals report a 30% increase in deliveries, and a 580% increase in visits for under-five children, which is especially significant in the Nigerian context where more than 12% of children don’t live to celebrate their fifth birthday. According to data analysis of the World Bank office in Nigeria, Kwara has actually become the second-best performing state in Nigeria with respect to maternal and child care.

Pioneering program for health
In March 2014, the Kwara State Government committed to scaling up and taking over the funding of the program, which was originally set up with the support of the Dutch Ministry of Foreign Affairs. This commitment is a unique development, and a fitting one considering that the program has been geared towards building an effective, efficient and sustainable health system from the start. Its public funds have lowered the investment risk and catalyzed public and private investments, resulting in up-to-standard health facilities, financial protection for the poor and now, sustainable financing from the state government.

In addition to the success in Nigeria, the program has not gone unnoticed internationally. In 2014, it was recognized in the OECD DAC’s Prize for Taking Development Innovation to Scale, while a year later it was selected for the Global Partnership for Effective Development Cooperation’s case study competition. United Nations Secretary-General Ban Ki-moon has described this PPP as a groundbreaking, innovative hopeful example. “This unique initiative offers comprehensive healthcare to all people, year-round, at a modest cost. It is accomplished through co-operation among the Government, traditional rulers, the private sector and donors. This is exactly the kind of innovative partnership that we should replicate – here in Nigeria and beyond,” he added.

Click here to watch a Channels TV clip of the event.