On the eve of the adoption of the Sustainable development goals (SDGs), Dutch Prime Minister Mark Rutte delivered a speech in which he mentioned the Health Insurance Fund. Speaking at the United Nations Sustainable Development Summit, Prime Minister Rutte acknowledged that there was a lot to be done in the post-2015 development agenda. Even though SDGs predecessor, the Millennium Development Goals had been a variably a big success. 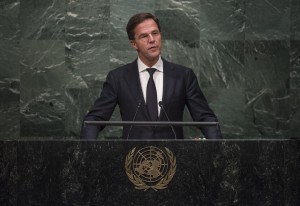 The Prime Minister said that the MDGs had taught the global community the importance of collective effort in order to “achieve great things”. “Goals like eradicating poverty, achieving gender equality and giving the poor better health care and sanitation should go hand in hand with multi-stakeholder involvement, sound economic principles and sustainable development. There really is no substitute for an integrated approach”, he urged.