On Monday, 23 November 2015, world-renowned behavioral economist Dan Ariely visited the Amsterdam office. He gave an engaging crash course for PharmAccess as well as invitees from the Dutch Ministry of Finance, Nibud (the Dutch expertise center on personal finances & budgeting) and representatives from various other research institutes. 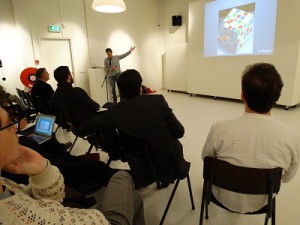 “This intersection of health and money and poverty is very exciting.” During his visit, Ariely made time for a short interview, see below.

Ariely emphasized the importance of understanding why people do what they do, and that to fulfil our mission of increasing access to care, we should never stop asking questions. PharmAccess invited Ariely to explore a research collaboration aimed at learning more about the (financial) decision-making behavior involved in prepaying, saving and giving for healthcare.

Ariely was accompanied by Kristen Berman, co-founder of Irrational Labs with Dan Ariely, and Toru Mino, previously with Kopo Kopo, a mobile payments start-up focused on helping SMEs in Kenya. On Tuesday, 24 November, a group of colleagues participated in a workshop with Kristen and Toru on how to apply insights from behavioral economic in our work, using four real-life case studies from various PharmAccess programs as practice material.

PharmAccess Group managing director Onno Schellekens noted that it was a great honor to welcome Dan Ariely. He also emphasized how special it is that someone of Ariely’s stature is devoting his time towards understanding the behaviors and decisions of the poor, with the ultimate goal of contributing to the great escape from poverty.

A short conversation with Dan Ariely

On working with PharmAccess

“This intersection of health and money and poverty is very exciting. None of us understand it yet. It’s something we need to experiment with. This is an opportunity to help.”

On the complexities of health

“Health is a very strange thing because we have an infinite appetite for health.” What makes it a particular challenge, Ariely says, is the aspect of randomness. “When you save, you know you’re saving.” Whereas in health, “sometimes you go to the doctor and you get better. Sometimes you don’t go to the doctor and you get better. It’s really hard to know the relationship between what you do and the outcome: you know that you’re going to give up money but you’re not sure you’re going to get anything out of it. A sure loss with a potential gain. Ideally what will happen is that if you go to a doctor, you wouldn’t feel any risk.”

“I’m less worried about the actual payment than I’m worried about early access.” Often it takes a lot of time to get the money to visit a doctor, and sometimes it’s too late by the time people do. But even once they have the cash they may delay going for other reasons. “So the question for me is how do you get people to go early? I don’t have a good sense of what the economic impact of that would be, or how it would change investments in infrastructure that supports better health.”

When people have issues with their health, it affects many aspects of their life and it’s often difficult for them to make the right decision. What we can try, Ariely said, is to eliminate as many barriers for them to seek care as possible. Providing funding for health through the health wallet is an effective way to do just that.

The idea of a mobile wallet with ring-fenced funds for health is also very much in line with Ariely’s notion of mental accounting: “Once you have separated your money and allocated it for a certain purpose, you don’t feel the same pain of paying, it’s not as aversive.” As such, the health wallet can take away another barrier to access.

To eliminate the barriers for showing up, experiments could focus on rewarding desired behaviors. This could include compensations for the time spent walking to the facility from a different village.

On the one hand experiments can simply focus on individuals – how to get people to put money in and how to make it into a habit. The more complex ones would involve the social network around people. How much would people be willing to give to other people and what would be the social pressures around that? These pressures can lead to decisions that are not necessarily in peoples’ best interest.

“The networks of the poor in terms of obligation are actually fascinating and I don’t think we understand them very well.”

He mentions the new and expensive treatments for non-communicable diseases that are becoming common in the West and their potential effect on social health insurance structures. “What do you do when one person could potentially drain the system? This leads to discussions about how to create a healthy ecosystem that doesn’t create the pressure or the opportunity for abuse. For me those are the big mysteries: how to manage the system the moment it’s a group of individuals and how do you make them not make bad decisions.”

On the benefits and drawbacks of technology

While the technologies available to us today provide unprecedented opportunities for financial and health-related inclusion, the current infrastructure is geared toward profit. Ariely explained how payment structures such as Uber, iTunes or Apple Pay are designed to minimize the pain of paying and thus to stimulate consumption. He feels that we should be using technology to influence people to behave in ways that benefit them in the long run, such as saving and investing money in things like education and healthcare.

For the bottom of the pyramid especially, Ariely has seen that without a cushion in the form of, for example, savings, emergency shocks are devastating. In light of his research, which proves that people are often irrational in their choices, often to their detriment, Ariely feels we shouldn’t be afraid to impose certain structures. Health wallets can be an effective way to increase access to care and influence behaviors in a positive way. “I’m interested in having a wallet for the things that people should do but don’t do.”