The conference dubbed ‘Digitalizing Health at scale’ was organized by PharmAccess, the United Nations Sustainable Development Partnership Platform (UNSDG PP) and the Embassy of the Netherlands in Kenya.

According to the organizers, there is much potency in accelerating progress by using Kenya’s cradle of digital technology. Digital technology can mobilize additional financing for health, scale health coverage to those who have been excluded from the health system and improve healthcare delivery and outcomes. The conference aimed to better align such existing initiatives and stimulate further investments.

The government has made important policy choices and commitments to improve access to quality care for everyone, including passing a bill in parliament making NHIF mandatory for all Kenyans, a UHC pilot in four counties and an enabling policy environment for the adoption of innovations that can be scaled to facilitate health coverage. However, CS Kagwe stated there is still work to be done to provide health coverage to the majority of Kenyans, especially those in the informal sector.

During the event PharmAccess also marked its 20-years anniversary. Over the past years the organization contributed to strengthening Kenya’s health care system by leveraging data and technology to support various initiatives on health financing and delivery. CS Kagwe said, “I would like at this point to congratulate PharmAccess for its 20th Anniversary and its contribution towards strengthening the Kenya’s health care system. PharmAccess is leveraging data and technology to support various initiatives on health financing and delivery across Kenya. PharmAccess is working at this moment with Kisumu County to extend health insurance to residents of Kisumu, with innovations and data at the core of the initiative.”

The UN Resident Coordinator for Kenya Dr Stephen Jackson said underscored health as a central place in SDG 3 which is to “Ensure healthy lives and promote well-being for all at all ages.

“The use of digital technology in healthcare is transforming the healthcare experience across the world. The majority of the population across Africa is quickly being comprised of digital natives; youth that have grown up in the era of ubiquitous technology and are at ease with computer technology permeating all areas of their lives. Kenya’s innovation in technology is also world renowned and the country has been dubbed as the Silicon Savannah.  Subsequently, innovative opportunities in the digital health space are of particular interest in promoting accessible healthcare that equally have the potential to attract new investments opportunities and collaborations.”

Dr. Wasunna, PharmAccess Country Director Kenya said: ‘’On today’s event we lay the foundation for stronger public-private partnerships. PharmAccess will continue to support the implementation of enabling policies and encourage further health investments from the public and private sector’’.

Apart from Hon. Mutahi Kagwe, Cabinet Secretary for health the organizers also welcomed Dr. Peter Kamunyo, CEO of the National Health Insurance Fund (NHIF), Dr. Stephen Jackson, UN Resident Coordinator for Kenya and Kisumu Governor, Prof Anyang Nyong’o. The Governor gave a speech about the Marwa health insurance scheme in Kisumu, covering 45,000 indigents. He expressed his hope for the national government to commit financially and to scale the initiative nationally, to ensure that the most vulnerable are not left behind.

Cabinet Secretary Hon. Mutahi Kagwe ended his speech by acknowledging the United Nations SDP Partnership Platform for its valuable multi stakeholder partnership and the Dutch government for its bilateral support. He also congratulated PharmAccess for its 20th Anniversary and expressed his appreciation for the impact of the organization to strengthen Kenya’s health system. 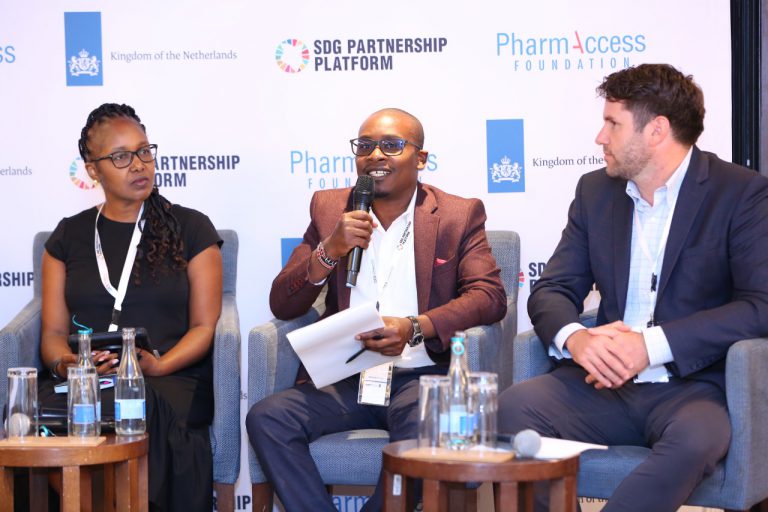 Nick Mutegi, Medical Credit Fund, speaking in a panel on Digital Health Ecosystems – The Role of Technology and Data in Health Financing and Delivery 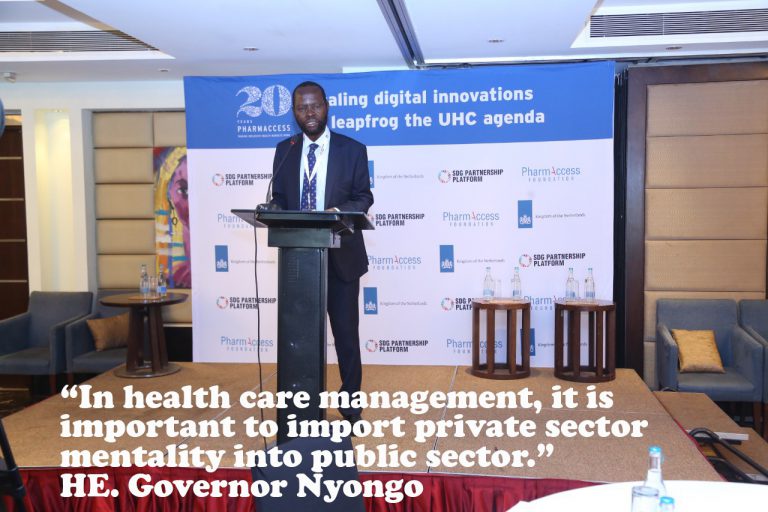