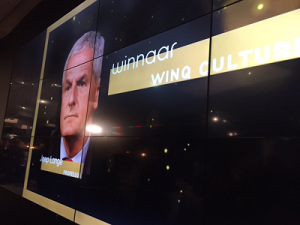 The awards were organized and hosted by Winq Magazine the biggest gay luxury lifestyle magazine in the world. The awards are given in conjunction with Workplace Pride awards which celebrates diversity in the workplace.

Accepting the posthumous award on behalf of Joep Lange’s family and former colleagues, Brandon O’Dell said, “Joep was a scientist, an activist and an impatient pragmatist. He was always in a hurry to find the next big question and to start turning potential solutions into actions.”

Joep’s scientific and activism work around HIV/AIDS treatment often included high risk groups such as migrants and gay men.  In one of the last interviews he gave, Joep told Wink magazine that despite decades of health education and promotion of HIV and AIDS prevention, the decrease in the number of HIV infections has stagnated for years in the Netherlands.

Playing a leading role within the H-TEAM (HIV Transmission Elimination Amsterdam), Joep worked towards decreasing the incidence of HIV infections among risk groups by introducing a diverse and innovative approach on prevention and treatment.

The Winq People’s Award honored Joep for his leadership role in the fight against HIV. Speaking about the awards, Winq Editor, Edwin Reinerie remarked that it is important to acknowledge the people that make a difference to society and make efforts of doing this in an innovative way in these difficult times. The award is given to individuals who have made significant changes in our society in a unique and important way.

You can read the Winq article here