The gala, held on the 26th of January in Amsterdam’s DeLaMar Theater, is the Netherlands’ largest charity event. Guest of honor Congolese gynecologist and human rights activist Dr. Denis Mukwege delivered an inspiring speech highlighting the importance of the work of the Dutch Postcode Lottery. During the gala he also received a grant of 1 million euro for his groundbreaking work in Panzi hospital in the Democratic Republic of Congo.

Thanks to the 2.5 million lottery participants in the Netherlands, the Dutch Postcode Lottery raised over 302 million euro in 2014. The Dutch Postcode Lottery has been raising funds since 1989 to support organisations working towards a fairer and greener world. Forty percent of the lottery’s annual turnover goes to charity. The lottery has steadily grown to become the biggest charity lottery in the Netherlands and supports 92 non-governmental organisations. Since its founding, the lottery has dispensed over 4.4 billion euros to its beneficiaries.

PharmAccess has been a beneficiary of the Dutch Postcode Lottery since 2013 and received its third annual grant of 500,000 euro. PharmAccess is sincerely grateful to the Dutch Postcode Lottery and its participants for their support and recognition of our work. With this annual grant, we can continue to improve access to affordable and high quality health care for people in Africa. 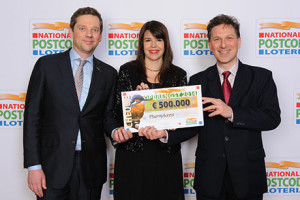