On Thursday 21 January 2016, PSP4H and PharmAccess were invited to present the results of a qualitative survey conducted on chamas’ health savings behavior to a wide group of healthcare professionals in Nairobi as part of PSP4H‘s policy seminar series. 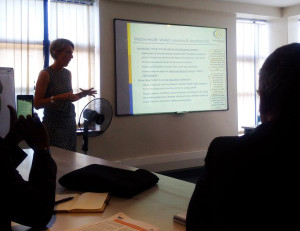 The main objective of the research study was to understand perceptions, needs, concerns, drivers and barriers towards the use of a mobile health wallet as a health savings vehicle among Chama members. The research was conducted by Ricochet Research through focus group discussions and in-depths interviews among 30 chamas in three slums in Nairobi and six rural low-income areas in Nandi County in September 2015. The insights gained from this research were also used in the design of the first mobile health wallet in Kenya, M-Tiba, introduced by Safaricom, CarePay and PharmAccess in December 2015.

The research revealed that while chamas tend not to save for unknown events such as healthcare, the prospect of saving in a mobile health wallet was received very enthusiastically. Most of all, they appreciated the fact that the health wallet is not limited to family members and children under 18, that it’s easier to use, that the money in the wallet will never expire, that it’s private and discrete, that it’s earmarked just for health and that they trust the savings are secure. Another benefit is that it’s more geared towards self-employed people with small incomes, in that they can save small amounts, little by little in their own time. Collecting contributions through chamas also gives them the discipline to save for healthcare.

At the same time, many people indicated that imposing a fixed amount for all chama members didn’t make sense to them, as one person’s healthcare needs can differ greatly from the next person’s. In Nandi, peoples’ income is often seasonal and they were concerned about not being able to contribute every month. Others wanted to be able to save more when possible. Quite a few suggested the option of being allowed to do additional individual top-ups. They were also interested in the possibility of transferring money from one health wallet to another, and of being able to transfer their contribution directly to the chama’s health wallet account rather than through the treasurer.

The average amount they were willing to save was 200 Kes (around 2USD) per month. They mentioned that a financial reward (or interest) would be needed for them to encourage them to save consistently. This could be a free start-up amount, a bonus amount or top-up percentage upon reaching a certain level of savings, awarding interest on the savings or even the option of taking out a health loan.

Further quantitative research will be necessary to investigate possible financial incentives for Chamas to save for health in a mobile health wallet.

Read more on mHealth at PharmAccess