Lilianne Ploumen, Dutch Minister for Foreign Trade and Development Cooperation, presented him with this royal decoration at the 21st AmsterdamDiner, one of the Netherlands’ largest fundraising events for the fight against HIV/AIDS.

Ploumen praised Van Rooijen’s dedication and his pioneering work in the fight against AIDS. ‘Peter van Rooijen was one of the aid workers of the first hour, supporting hundreds of AIDS patients in the early 1980s.’ Van Rooijen has devoted his professional life to the HIV/AIDS field for the past 32 years, centering his career around the well-being of people. Ploumen expressed her hope that this royal decoration would inspire him to continue his valuable work for a long time. She also referred to the fact that in 2000 Van Rooijen was one of the first Dutch people in the field to direct their attention abroad. His leadership stimulated progress internationally in the fight against HIV/AIDS, Ploumen said. Princess Mabel van Oranje-Nassau also said a few personal words, calling Van Rooijen her mentor and her anchor.

Peter van Rooijen, now Chair of the Global Fund Finance & Audit Committee and Executive Director International Civil Society Support, previously was the director of the Aids Fonds and STOP AIDS NOW! He has been a member of the Health Insurance Fund Board since 2005. 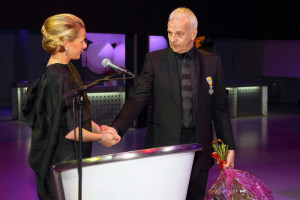