“If there was anyone destined to hold his own TED talk, Joep Lange was. His work and life touched millions of lives, and should be shared with the world,” explained Monique van Dusseldorp of TEDx to the audience during the latest TEDxAmsterdam edition on 28th November. For this reason TEDxAmsterdam, in cooperation with PharmAccess and AIGHD, organized a posthumous talk to share his story with the world. 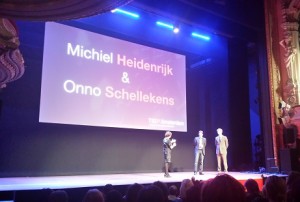 The talk starts with a video that briefly summarizes the scope of Joep’s legacy and is followed by actor Kees Hulst, who recites Joep’s story ‘Africa on the Rise’. Joep wrote this story just days before boarding MH17 for the opening of the academic year at the University of Amsterdam. The article, dedicated to the topic Research in Africa, touches on his personal motivation for working in Africa. After the Posthumous talk Monique van Dusseldorp interviewed Michiel Heidenrijk and Onno Schellekens, on how organizations AIGHD and PharmAccess will continue his legacy.