On World Malaria Day 2015, a day to mark the importance of the global fight against malaria, PharmAccess publishes the Learning & Analysis brief, titled‘Reducing misdiagnosis of malaria in Tanzania through regular training of lab staff.‘ This brief shows how PharmAccess through regular on-site lab training in health facilities in rural Tanzania reduces the number of misdiagnosis. 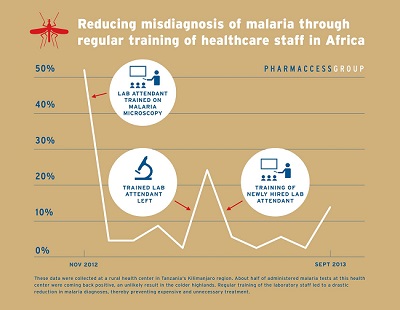 Malaria is among the top ten diagnoses in most parts of Tanzania. As mosquitos do not like cold temperatures, the number of malaria cases in the highlands should be significantly lower than in the rest of the country. However, PharmAccess and its implementing partners noticed an unusually high incidence of malaria cases being reported by numerous health facilities in the Kilimanjaro Native Cooperation Union (KNCU) health insurance program in rural parts of the Kilimanjaro region.

During routine quality improvement support through the SafeCare program, it was found that the lab attendants at many rural dispensaries and health centers in the Kilimanjaro region had never received formal laboratory training. This fact, combined with the high rates of positive malaria tests and the unlikelihood of such high incidence of the disease in the highlands, led to the suspicion that these lab attendants were misinterpreting their patients’ blood films.

To understand the need for regular training to lab staff to reduce misdiagnosis, research has been conducted to compare data from three anonymized facilities in the KNCU program. The objective was to test the hypothesis that the high positivity rates were linked to the level of training of lab staff.